The IMG rodent facilities are housed in two locations, in the Campus of the Czech Academy of Sciences in Prague-Krč and in the BIOCEV centre in Vestec. These state-of-the-art facilities, by its design and technologies and with a total housing capacity of more than 70,000 rodents (mainly different strains of mice and rats and their transgenic forms), provides a standardized environment, procedures and professional care. New breeding technologies help to maintain the high health status of barriers and thus allow the production of animals free of specific pathogens under the FELASA recommendation. The technologies also increase animal welfare, reduce the stress of excessive handling, and also improve the efficiency of facility management which meets the highest standards of animal care and welfare according to international standards. Rodents are used in the IMG in a wide range of basic research, especially to identify the functions of many genes. Many of them are also found in humans and can, therefore, be expected to have a similar function.

The fish facility is located in the IMG building in Prague-Krč. It has a capacity of 950 aquariums and houses transgenic, mutant and unmodified lines. The main model organism is Danio rerio. This small tropical fish has been increasingly used in biomedical research. Simple breeding, rapid early development and high productivity allow experiments to be carried out in a highly efficient way. The fact that embryos are transparent facilitates the analysis of results. Zebrabase, a database developed on-site and designed specifically for fish facilities, is used to record and manage fish lines. It is currently used by more than 30 laboratories around the world.

The chicken breeding facility is located in the village Koleč, north of Prague, about 45 km from IMG. It includes mainly genetically defined inbred, congenic and outbred chicken lines. The breeding facility produces eggs, embryos and chickens for several research groups focusing on the chicken model. Chickens are used mainly for virological or immunological projects, currently for the study of avian leukosis viruses, which, among other things, serves as a model for the study of other retroviruses, such as human immunodeficiency virus. For scientific purposes, we develop genomic editing techniques using the CRISPR / Cas9 system, which is routine in mammals but is only in the basic research phase in birds.

Clawed frogs are managed by IMG in cooperation with the Institute of Biotechnology in Vestec. This biological model is often used in developmental and molecular biology. The advantage is simple and unpretentious breeding, repeated possibility of obtaining a large number of embryos, complete development outside the mother’s body and the size of embryos facilitating microinjection and micro-manipulation techniques. This model is used in projects of asymmetric localization of biomolecules during early development and studies of embryonic healing and regeneration regulation.

The common nematode facility is located in Prague-Krč. The nematode is a tiny free-living non-pathogenic nematode found worldwide Its unpretentious cultivation and breeding rate is an advantage that facilitates genetic studies of eukaryotes. Its experimental versatility and similarity between cellular and molecular processes with other animals have made nematodes an excellent model organism used at the IMG mainly for basic research on the development of germ cells.

The lamprey facility in the IMG building in Prague-Krč is equipped by two incubators, which can house up to eight aquariums and two hundred animals in total. Lamprey is an excellent model organism for studying vertebrate evolution because it belongs to the oldest vertebrate taxon (jawless). At the moment, there are exclusively sea lamprey animals imported from Spain.

Annelid, housed in the IMG building in Prague-Krč, is a marine invertebrate animal. It is a representative of protostomes and is primarily used to study the evolution of the eye and nervous system. Its genome has been sequenced and has been found to contain many orthologous genes and microRNAs present commonly in vertebrate genomes that have been “lost” in the genomes of the “classic” models e.g. fruit flies and nematodes. A model annelid organism allows the use of modern methods of genome editing and transgenesis.

Amphioxus housed in the IMG in Prague-Krč, is a marine invertebrate animal, which resembles vertebrates with its embryonic development and internal structure.. It is characterized by a relatively slow genome evolution and morphological similarity to chordate fossils and is therefore sometimes referred to as living fossil. Amphioxus is a suitable model for understanding the body plan of the original ancestor of all vertebrates. Amphioxus is a unique evolutionary model organism for the study of ancestral traits common to all chordates and also for the study of vertebrate innovations. 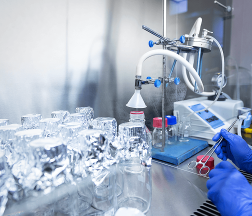 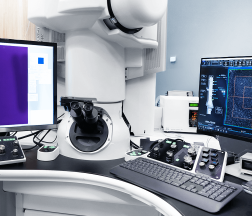