Despite the group’s name, epigenetics is not its primary research area; the group owes its name to its early years, when ambitions to study epigenetic mechanisms were crushed by the lack of success to obtain funding for studying chromatin during mammalian oocyte-to-embryo transition. Nowadays, the group studies evolution of genes and their regulations, particularly post-transcriptional regulations and genes that mediate it, mainly in the context of the female germline in mice. However, there are occasional detours into other research areas and model systems, such as oocytes of other mammals, zygotes, spermatogenesis, soma, and elsewhere. The major research theme during the recent years have been mammalian small RNA pathways (Fig. 1). The team explored their functions and co-existence in mammalian germlines and attempted adapting RNA interference into an antiviral mechanism in vivo. This research is still going on. Additional research areas investigated in the lab recently include gene expression during mouse oocyte-to-embryo transition (Fig. 2) and long non-coding RNAs in mouse oocytes and zygotes. 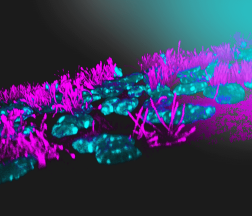